Finding Your Voice with Your Own Unique Way like Natasha Mannuela, Olivia Marzuki, and Phieter Angdika 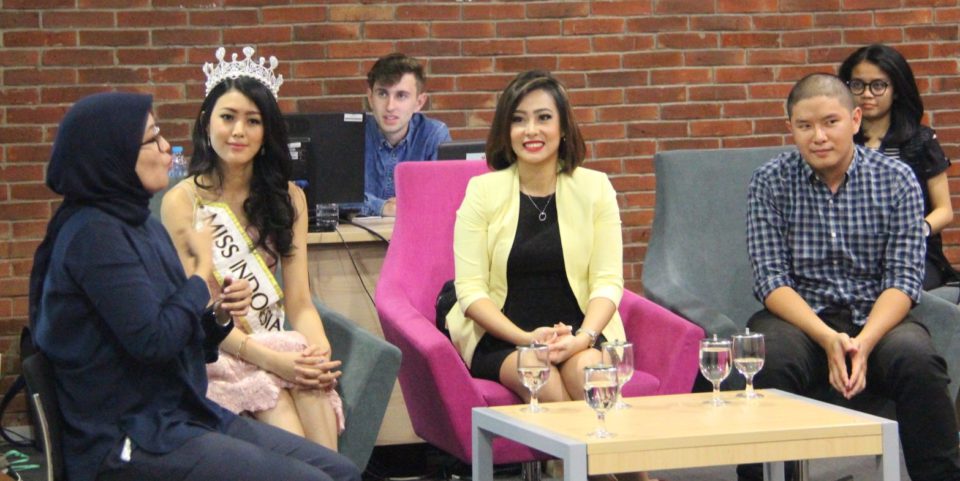 The development of communication has always been attractive. Finding Your Voice is the theme that a talk show, PlayTalk, used to dig some unique ways of communication from three inspirational speakers, who are a beauty queen, news anchor, and the one who has a special way to communicate. The three wonderful speakers were invited to share their inspiring story on Tuesday, March 7th, 2017, at Auditorium BINUS fX Campus, Jakarta.

“The new field that can be dug in the world of communication is immensely wide, which invites loyalty in taking care of the cooperation between MNC Play and BINUS INTERNATIONAL, especially with the Communication program for the program PlayTalk 2017. We always attempt to bring over inspirational speakers, who are experts in their field,” utters Ade Tjendra, Commercial Director of MNC Play.

Natasha Mannuela Halim, an inspiring woman who was crowned as Miss Indonesia 2016, attended to share her experience. Her achievement in the beauty world instantly increased to its peak when she successfully took the position as a Runner-Up in a prestigious beauty event, Miss World. This 22-years-old woman often involves in social activities that leads her to meet people from different culture backgrounds. Her communication skill with diverse people from all over the world was simply rousing for the audience in PlayTalk.

The flawless talent in delivering message to the public is a great way to describe the second speaker of PlayTalk. Olivia Marzuki, has been in the presenting world for nine years. This enough experience of hers has her owned the fascinating skill to creatively arrange news for an attractive product for public consumption. In the present, Olivia is actively giving lesson about Public Speaking and working as a presenter in one of news channels in Indonesia.

The third speaker in PlayTalk has an extraordinarily exceptional communication skill among the three. Phieter Angdika, whose auditory has a problem to perform accordingly to its function, attended as a representative of Pusat Layanan Juru Bahasa Isyarat (PLI), Gerakan untuk Kesejahteraan Tunarungu Indonesia (GERKATIN), and GERKATIN for youth.

Phieter lost his hearing in the age of one. Due to the unwanted disability, he struggled to master sign language and the skill to communicate with normal people. His attendance in PlayTalk brought a new experience for the participants, because of the opportunity to learn a little bit about sign language and pay more attention to the suffered people. The story of him also brought a mission, so all of the public facility can be friendlier to the people, who have the same fate as Phieter.

As an addition, a rock band, S.Y.D.E.R.A, performed to complete the talkshow. S.Y.D.E.R.A or Super Young Dangerous Energetic Rockstar in Action put Paramore as their role model. The band, who has five members, firstly showed up with a single “Lepaskan”, whose writer is Benjamin Renhat, the owner of an entertainment label, Bahaya Records. Other than S.Y.D.E.R.A, Bahaya Records has proudly borne other musicians namely, Putri Sinam, Souljah, Tipe-X, Gangstarasta, and Bigwave.

“There are a lot of new things that a communication student could learn. One of them is the unique way to communicate from one to another. The ability in understanding it would definitely help us in mastering the world of communication comprehensively. Thank you MNC Play for being so loyal in cooperating with us by holding Play Talk 2017,” said Christine Gneuss, the Head of Communication Program of BINUS INTERNATIONAL.

Play Talk was successfully being held because of the cooperation of MNC Play and International Communication Binus University Program, supported by Binus TV, MNC Pictures, V Radio, Global Radio, Good Day Coffee, Go-Tix, and Pizza Nagih. Students and audience that want to attend PlayTalk could do a reservation by clicking PlayTalk in Go-Tix. 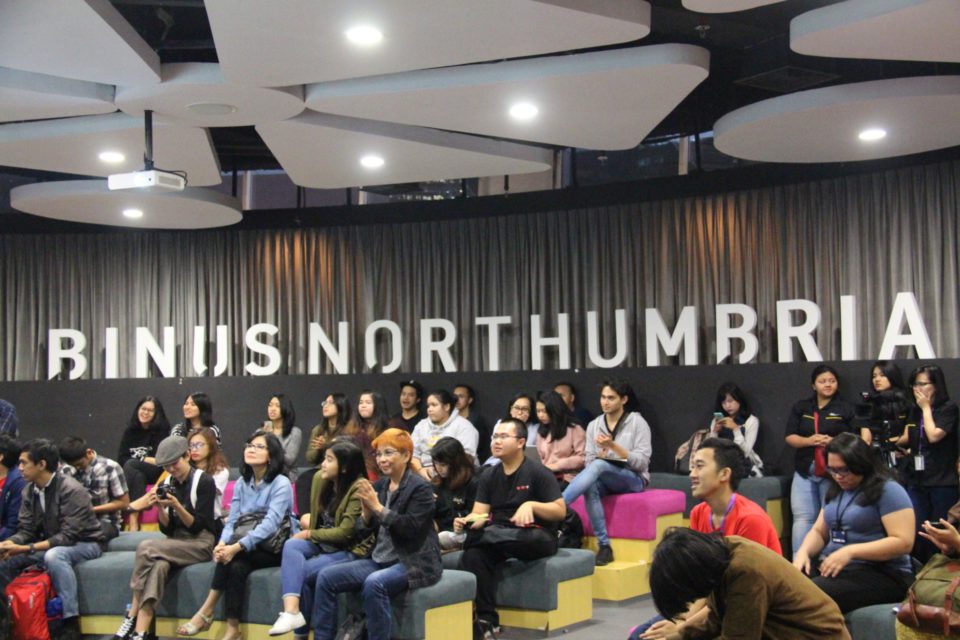 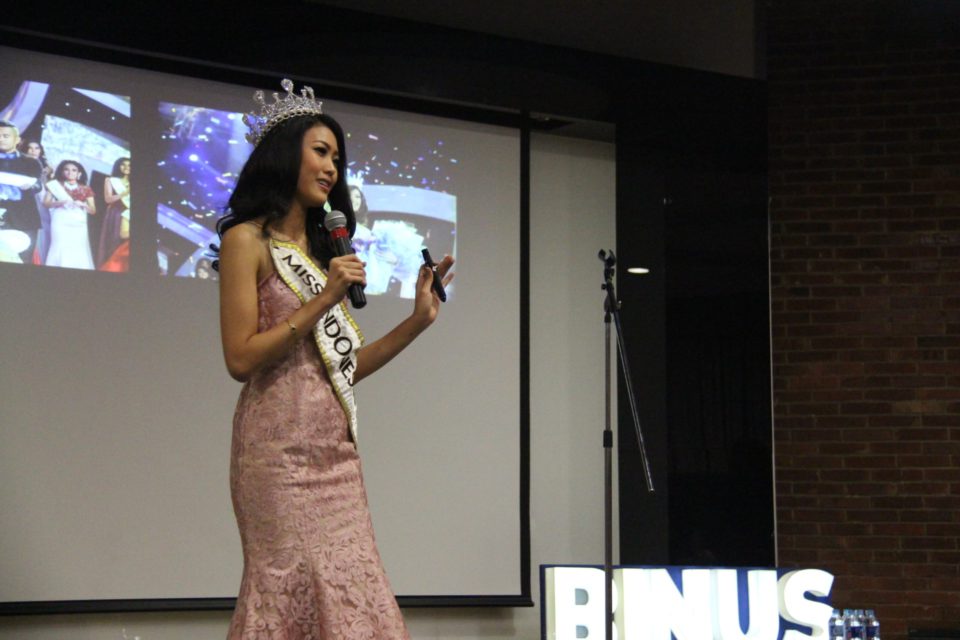 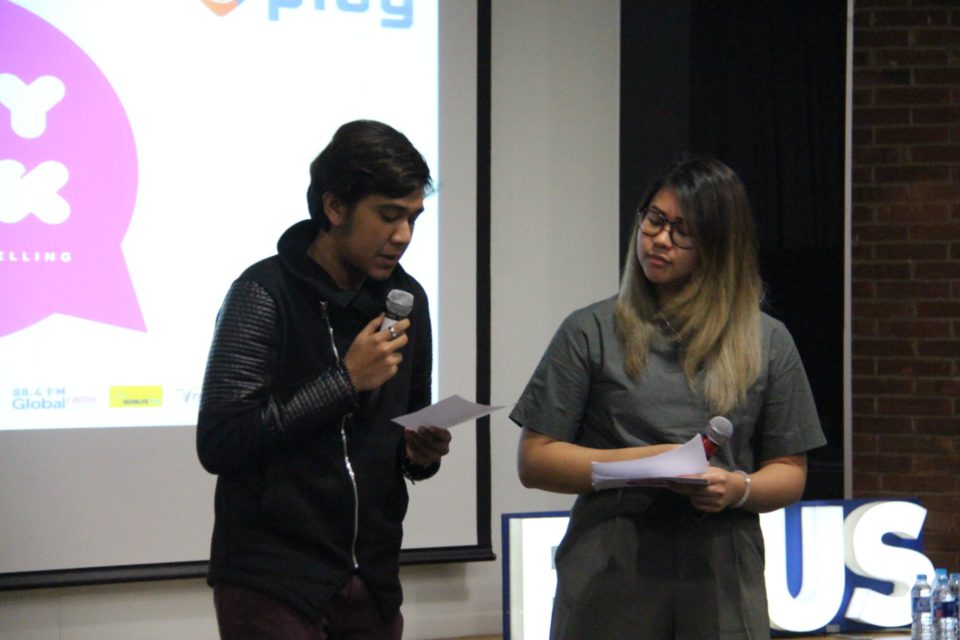 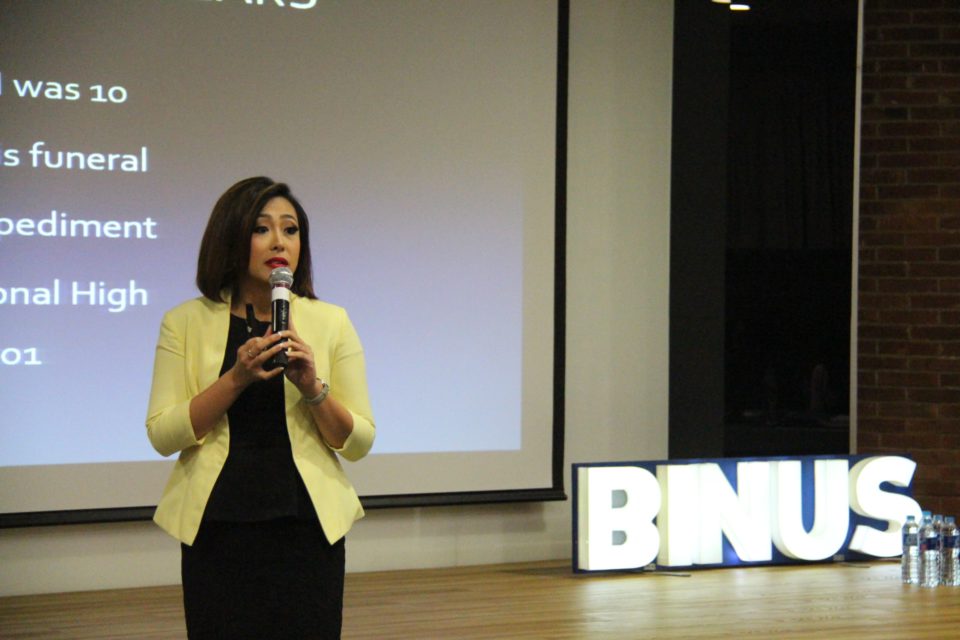 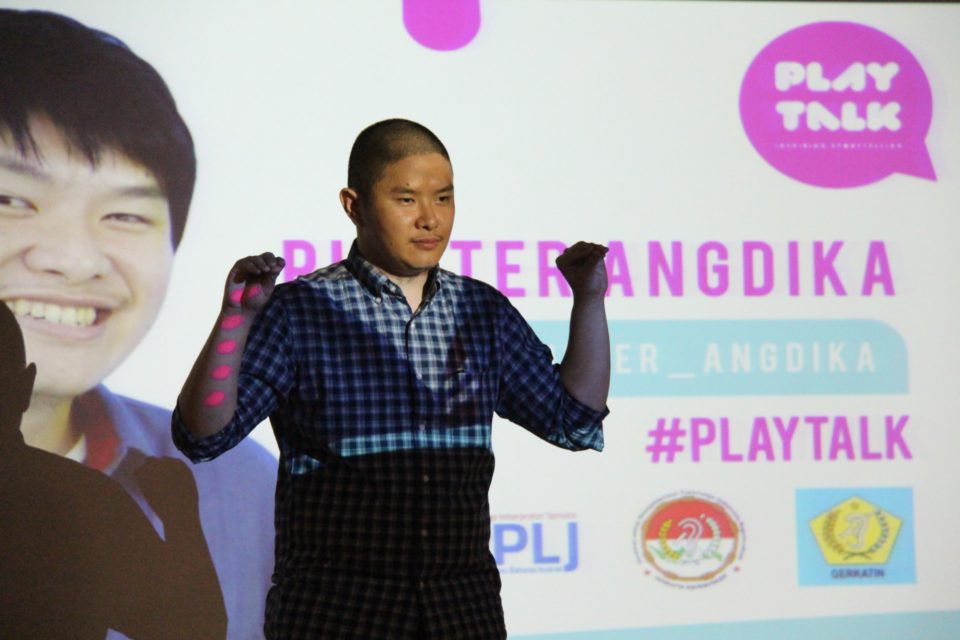 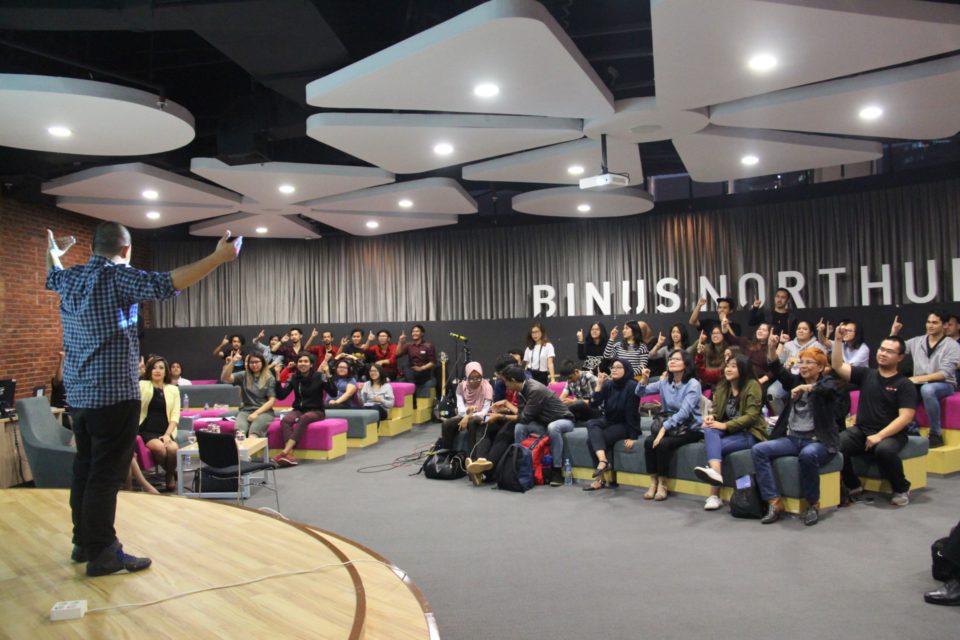 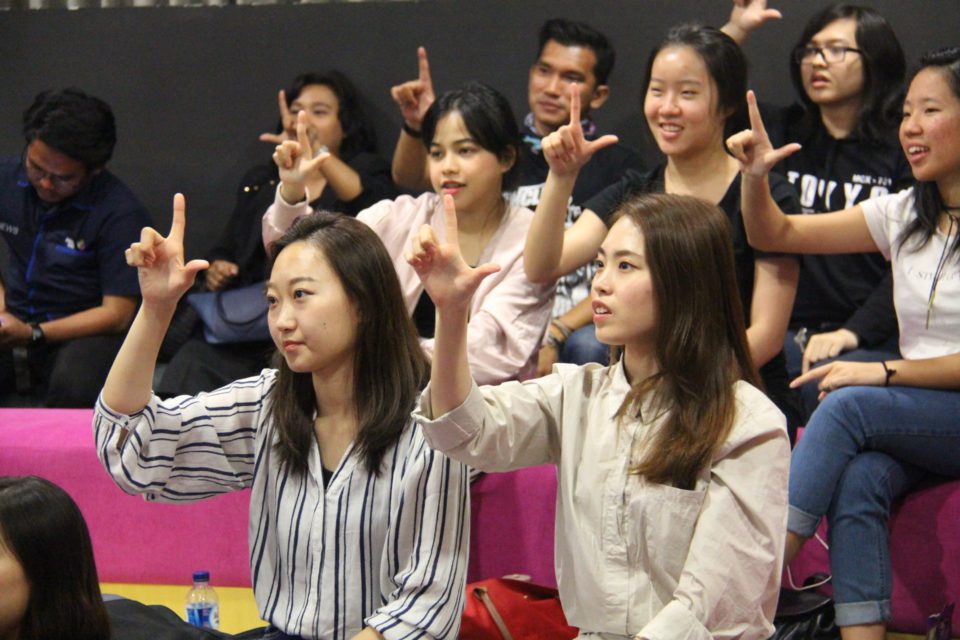 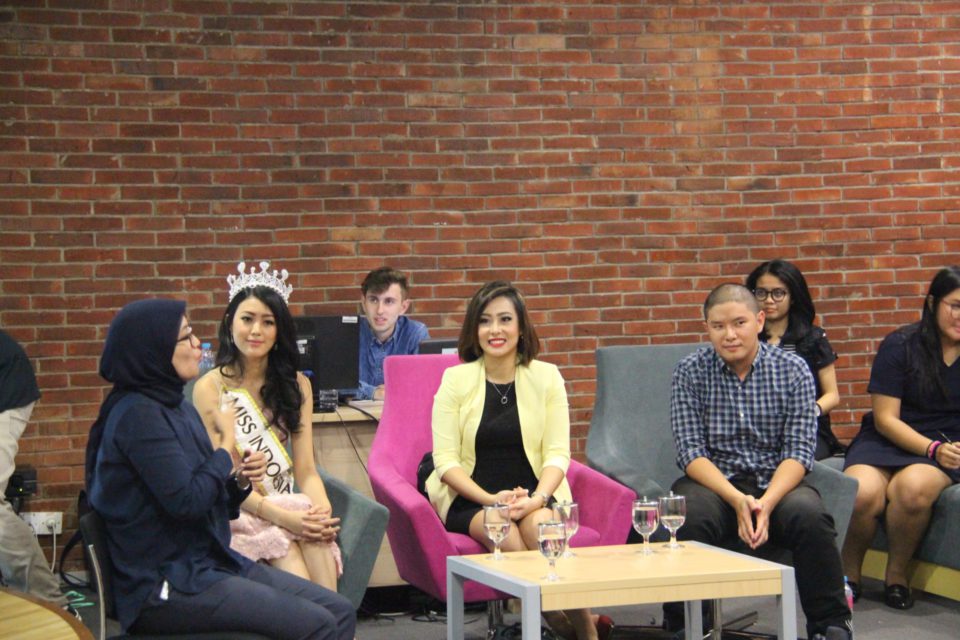