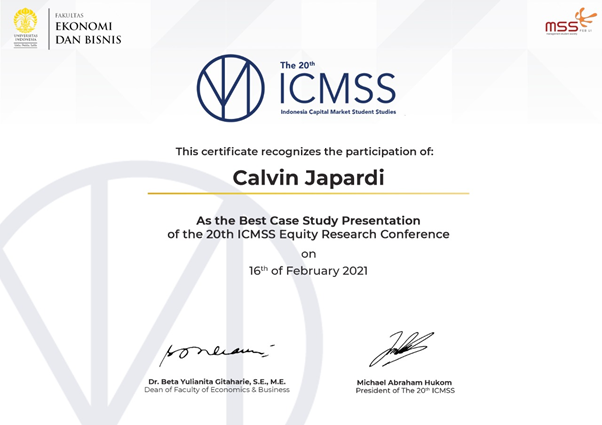 Calvin Japardi, our 8th semester student, succeeded in winning the best case study presentation at the 20th ICMSS (Indonesia Capital Market Student Studies). The case study competition held during the ICMSS is the other competition held aside from the main event, which is the ICMSS equity research challenge. In this event, the members of the groups that reached the semi-finals were sorted out into a group of 8 to make an industrial sector research paper. In this edition of ICMSS, Calvin had to make a research paper on the airline industry along with the presentation, together with 7 other students from other universities such as University of Melbourne, Universitas Prasetya Mulya, and University of Indonesia, which were selected randomly by the ICMSS committee. The report must be done before the second day of the competition, in which during that day, the groups presented the report in front of a team of panellists.