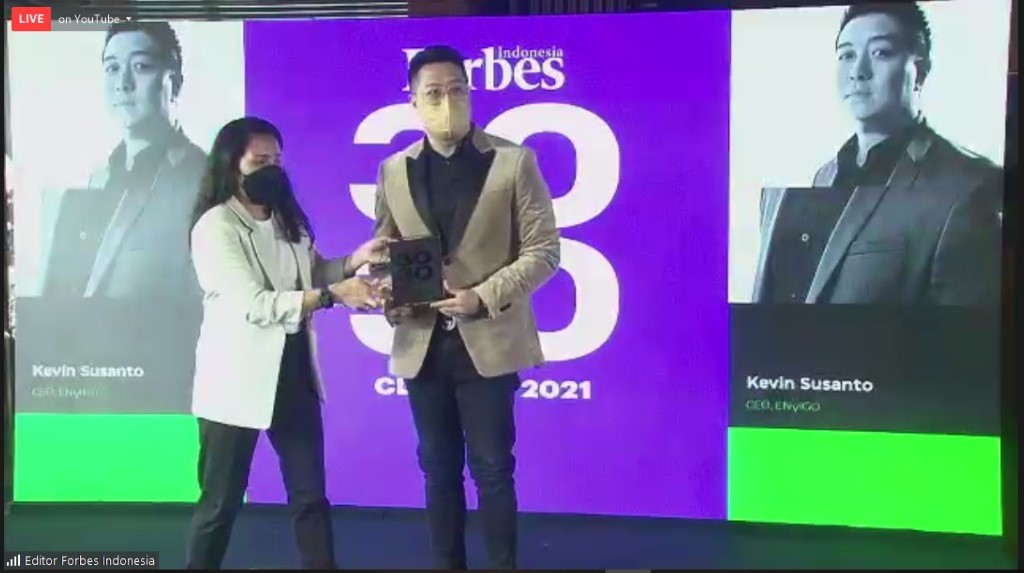 We would like to congratulate Kevin Susanto, our alumni from Binusian 2014, for his remarkable achievement as one of Forbes Indonesia’s 30 under 30 class 2021 in the Entrepreneurs category. As the CEO of EnviGo, Kevin is offering green and eco-friendly food packaging as solution.

The awarding event was held by Forbes Indonesia on 9 April 2021, to celebrate Indonesia’s Young Achievers and Game Changers. The event began with a welcoming speech from Roger Finnie, CEO of Forbes Indonesia, who congratulated all awardee and said that Indonesia has the potential to be the second largest economy by the end of this decade, as 64% of Indonesia’s population is millennials.

Afterwards, the event continued with teatime with three speakers which focuses on the importance of digital technology from the finance technology (fintech) industry and education sector. Forbes Indonesia senior writer, Elisa Valenta, accompanied the talk as the moderator. The first speaker was Anderson Sumarli (26), Co-Founder and CEO of Ajaib Group, a securities company. Anderson said that currently, fintech in Indonesia is mostly used for consumption. He believed that fintech has the potential to teach people how to do financial planning better. When asked on how Ajaib would be able to maintain its position as one of the best securities in Indonesia, he said that securities companies are not competing with each other, but strengthening each other. From the education sector, Forbes invited Anbita Nadine Siregar, Founder of Generation Girl, a non-profit organization aims at introducing young girls to the STEM field, to share her experience in empowering the society. Nadine realized how fast technology grows rapidly and she wants young girls to have digital technology skills. Forbes also invited Gatot Soepriyanto, Dean Faculty of Economics and Communication of Binus University and one of the lecturers in our program, to share his experience on how Binus adapts in the rapid technology development. He shared that Binus University was originally famous for its IT program, thus Binus often uses digital tools for learning which allows students to get used with technology. Secondly, Binus offered students one year to have a chance for internship, community service, and study exchange. Furthermore, Binus International University provides opportunities for students to expand their network with its double degree program that allows students to experience study abroad with reputable overseas partner universities. After the inspiring teatime session, the event continued with the awarding ceremony to the awardees from six different categories: Art, Entertainment and Sport; Entrepreneurs; Investment and Finance; Retail and Consumer; Social Entrepreneur, Philanthropy and Activism. It was a very inspiring event, as it proves that age is not a barrier for someone to achieve success. It is hoped that Forbes 30 under 30 event could inspire other young Indonesia generations and push Indonesia to grow better in the future. We would like to once again congratulate Kevin for his achievement and wish him the best for his future endeavor!