Inspiring Tales: Hang Dimas Santoso and His Road to Success 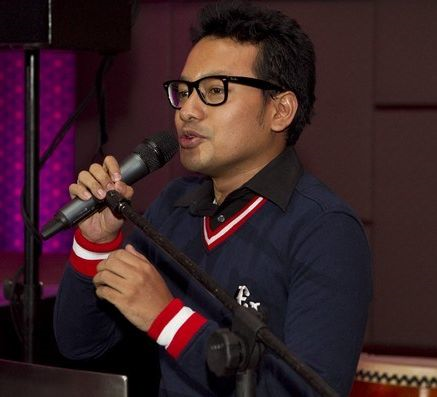 Hang Dimas Santoso has lived the life of a rock star, but this former manager and keyboardist of Hujan Band admits that he has always been a geek at heart. Attending Binus International University’s very first Tech Media Talk on March 10, he gave us insights regarding the music industry in Indonesia. He also delivered an inspiring life story that grabbed my attention and made me think about the choices I make.

During the course of his life, Hang Dimas was confronted with many important decisions that could alter his entire journey. He quit a rising local band in Bandung, and instead pursued his bachelor degree in Singapore with funded by a scholarship. After saving and saving, he then enrolled in an audio engineering school to follow his true passion, music, and he formed a band that won the Regional Music Award in 2003. He then came to another crossroads in his life. He quit his job in Singtel, and he moved to Malaysia to start his own group.

Hujan Band quickly turned into a musical phenomenon. It was the first Malaysian band to have 100,000 followers in MySpace, and 1,000,000 views on YouTube. The band visited the United Kingdom, Australia, and France twice for their tour. Despite the fame and the glare of the spotlights, Hang Dimas discovered a noble aspiration. As the founder and director of PT Langit Data Indonesia he wished to build a music licensing platform in Indonesia, and he has been fighting for it since then.

This ability to mix up his career and choose the path less travelled by requires commitment and personal strength of character.

Life often exposes us to difficult situations that may require us to sacrifice our dreams and passions. During high school, I was confronted with a series of crucial decisions that forced me to pick between the things that I wanted, and what society wants of me. This shaped my view in that it was easy to see myself as a victim of the system. Hang Dimas’ tale tells me otherwise; it has given me a sense of hope and trust in life. We should embrace every choice that we make, and we should not allow regret to get the better of us. Hang Dimas had a noble dream, and I, too, have an aspiration that I would like to achieve. Now it is time to embrace those decisions!