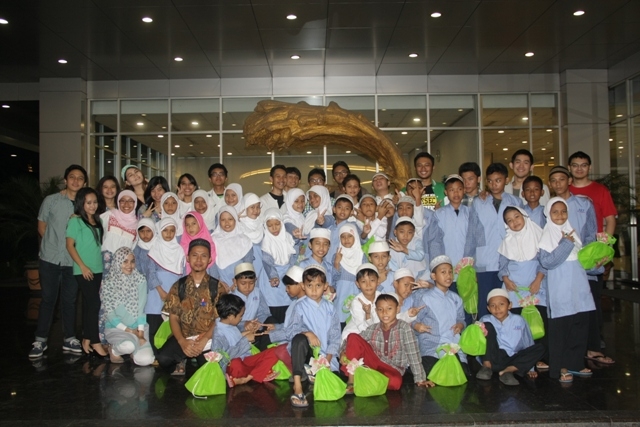 The tradition, which has been routinely held for the past two years were attended by around 100 children from Nurul Iman Orphanage Kebayoran branch, along with mosque caretakers and internal families of BINUS International. The ambiance was warm and pleasant.

Sincerity may seem simple and modest, but it has the strength supported by miracles. The sentence said by Mario Teguh represented the success of BMS Chatting 2013 event. In order to fund this event, the committee sold tajil in campus and gathered donations from the students. Their effort has been paid off. In less than a week, the committee managed to gather up to two million rupiah.

When Innovation met with Ruby Robiah A, she said that this breakfasting event is organized to bring people closer together, and this event is also a medium for BMS to improve soft skill, to improve and motivate them to take bigger responsibilities in managing the event.

Not only that, to show gratitude for the blessing which we have received so far and to show our kindness towards others in need, students of BINUS International also provided additional benefits for the children of Nurul Iman Orphanage. Most of these children are still in elementary and junior high school.

“I am very delighted to be invited here, to BINUS International. We meet with a lot of nice people. Hopefully I’ll get an invitation again next year,” Reza, one of the children of Nurul Iman Orphanage, said. (Karunia Fransiska)